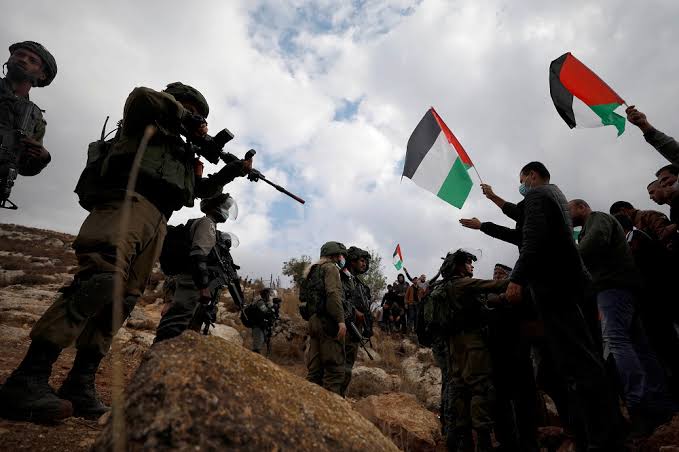 Areas inhabited by Muslims in the Middle East A Jewish state of Israel The journey to the Middle East crisis began with birth. The Belfort Declaration is associated with the birth of the state of Israel. In 1971, the then British Foreign Secretary A. J. Belefo wrote a letter to Lord Rothschild, president of the British Zionist Federation.

The purpose of the letter was to establish a homeland for the Jews. This is known in history as the Belefor Declaration. In 1922, at a meeting of the League of Nations, Britain was given a mandate over Palestine.

Immediately after the announcement of the bailiff Jews from Europe-America began to settle in Palestine on a large scale. And the Palestinians have repeatedly protested against this. They demanded the end of the British mandate. They wanted an independent Palestinian state. But the great powers repeatedly rejected their demands.

The animosity that was born out of the partition of the Arab-inhabited Palestinian territories by the United Nations in 1948 has not been completely eradicated even after 63 long years.

The Jewish state of Israel was formed in the Palestinian territories by the Western powers using the United Nations that day. Following the declaration of statehood in 1948, Israel became embroiled in war with Egypt, Jordan, Lebanon, and Iran. That was Israel’s first war with the Arab states. The Arab states subsequently became embroiled in two wars with Israel in 1973 and 1973.

In the 1967 war, Israel occupied the Sinai Valley in Egypt and the Galen Valley in Syria. Subsequently the Camp David (197) Agreement In return, Egypt recaptured the Sinai Peninsula, but Syria did not reclaim its Galen Valley. In the 1967 war, Israel occupied the Palestinian territories of Gaza and the West Bank. At the same time, they took control of East Jerusalem and the Al-Aqsa Mosque, a Muslim holy site. Israel now claims the area, speaking of its holy sites Judea and Samaria.

Judea and Samaria are mentioned in the holy scriptures of the Jews. The Middle East peace talks were born in 1973 in Geneva. The talks led to the signing of an agreement at Camp David in 1989 between Egyptian President Anwar Sadat and Israeli Prime Minister Benjamin Netanyahu, in return for which Egypt regained Sinai territory. It is true that Egypt regained its lost land, but for a long time it was left alone in the Arab world. Even Sadat with his life to pay the price
Was done.

The peace talks that began on November 1, 1992 in the Spanish capital, Madrid, in the presence of former US President George W. Bush and former Soviet leader Gorbachev, were largely a continuation of the Middle East peace talks.

But in 1991 about Iraq The UN decision is effective In order to do so, the United Nations sent troops there and forced Iraq to comply. And the American administration was proactive in this regard.

Yasser Arafat is the undisputed leader of the Palestinian movement. He died in Paris in November 2004. But how will Arafat be recognized in Palestinian history by recognizing the Jewish state of Israel, a longtime enemy, or by establishing an autonomous Palestinian territory? A traitor or a far-sighted statesman?

Arafat also received the Nobel Peace Prize along with former Israeli prime ministers Rabin and Peres. Arafat was one of the most talked about figures inside and outside the Palestinian community. While Arafat’s role has been widely praised in the West, there is no denying that he made the risky decision.

At first, the decision to recognize Israel and to coexist peacefully with Israel provoked a mixed reaction among the PLO. But because of Arafat’s determination, the PLO’s executive committee finally accepted the decision and supported Arafat’s position. It was a major victory for Arafat. His role was backed by former US President Bill Clinton. He also received support from European countries.

He was also supported by the moderate Arab states. Everyone has identified his decision as a historic one. But one of the major weaknesses of Arafat, whose father’s name was Abu Amar, was that he did not receive absolute support from the Palestinian movement as a whole. His own party, Fatah, broke up. A section of Fatah, led by Abu Musa, has identified him as a traitor. He is accused of selling out Palestinians.

The late Marxist leader George Habas also opposed the agreement. But without such a decision, what other option did Arafat have? What could Arafat have done to ensure lasting peace in the Middle East without coexistence with Israel? The history of the last 63 years shows that the lack of mutual trust has increased the animosity between Israel and the Palestinians.

The current situation in Palestine is deplorable. His fellow Arabs are befriending Israel. What could be a greater betrayal of one’s own nation in history!

On August 14 last year, Israel The United Arab Emirates (UAE) has agreed to normalize relations with Iran. Within a few days, Bahrain and Sudan followed in the footsteps of the UAE. Morocco then announced the establishment of relations with Israel. It is rumored that Israel has a secret relationship with Saudi Arabia.

All in all, Israel has a strong position in the Middle East. A nomadic nation brought the whole of the Middle East under its control by weaving a web of tactics and conspiracies. Muslim superpowers including Turkey, Egypt, Morocco, UAE, Bahrain, Sudan, Saudi Arabia are currently allies of Israel. Where is their time to think of innocent Palestinians!

But the Palestinians have not stopped saying that. It has been dealing with the enemy for decades with what it has. Young and old, women and children are dying in poverty. In the hope of a piece of independent territory. Maybe it will never be possible to implement it again. How much arrogance do they have towards the nations that are sold to power and interests? All places seeking justice without the Creator are closed to them today.

Hadil Salah when the whole world is silent for fear of the gunpowder of occupying Israel Adolescents like Al-Hashlamun Patiently going through his life. And the Muslim youth are going to say silently,

Look, when your blood cools down, when you fall asleep, when you see death at gunpoint, we Muslim girls wake up to take care of ourselves. Even with life, I do not allow myself to do so much damage to self-respect. The honor that the Lord gave you to do.