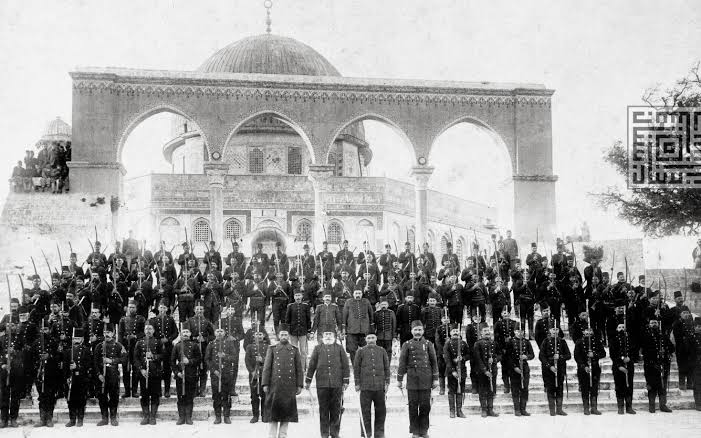 The conspiracy began in the last half of the twentieth century. Palestine, including Al-Quds Of the Ottoman Caliphate Under rule. Although the power of the caliphate nivu nivu, it is still the caliphate! Muslim power. The standard of living of the Palestinians is quite advanced and prosperous. The majority of the population is Arab Muslims and some Christians.

Jews make up four percent of the total population. Because of cunning, deceit, and dishonesty, the permanent home of the Jews is nowhere to be found. Due to deception, wherever he went, he was beaten. They had a nomadic life. How many days in this place and how many days in this place, this was their way of life. After being beaten, they dreamed of a land of their own. Where you can practice cunning and deceit in silence, without hindrance. How to keep the fire of unrest burning in the whole world, sitting in the cold head he will be able to draw the table of conspiracy.

The Jews dreamed of Jerusalem. Al-Quds, the love of Muslims. Palestine. Yes, Palestine will be the promised land of their dreams. The mission of fulfilling dreams begins. They will build a state in Palestine, but where is their lake here? Thousands of Jews live in Palestine as a whole.

World War I ended then. The Ottoman Caliphate was in opposition to the British Allies. They have fallen to the British alliance. Thousands of years of Muslim rule have been withdrawn from Palestine. In 1919 the authority of the Ottoman Caliphate was abolished
From Palestinian soil. In the alleys of the holy Al-Quds, there is now the arrogant march of British soldiers instead of Turkish soldiers. Palestine is now under British rule. Christian colony.

When World War I broke out in 1914, British troops arrived in Palestine to protect the Palestinians from Ottoman rule. Yes, to protect. They were welcomed by Palestinians who believed in Arab nationalism. The Ottoman rule then seemed to them to be foreign rule. Because the Ottomans are Turks and they are Arabs. Why foreigners will rule us? We want freedom. We will rule our country.

They forgot the basic teachings of Islam. The beauty of the Muslim Brotherhood was forgotten. (Or were they tricked?) Even though they are Turkish, they are Muslims. Muslim is the brother of Muslim. How is the brother a foreigner again?

But the ghost of nationalism was so firmly entrenched in their heads that they did not even have the power to do so. The war is over. Turkish troops have left Palestine. The work of the British is over. They have to leave this time. But no, they won’t! More of them to establish peace (!) In this region Must stay a while.

Palestinians who believe in Arab nationalism are still happy. It is too late, but they will get an independent territory. Where the Turks will have no authority. They will rule themselves. In 1917, the British Foreign Secretary, Lord Belfort, made a proclamation. History is what it is Remembrance as Belfort-Declaration Left. In the declaration he established an independent state in the Palestinian territories
Swear. It was a hoax with the Palestinians. Because, those who were outside the Palestinians who believe in nationalism, they are
He sincerely wanted Al-Quds and Palestine to remain under the Ottoman Caliphate. They could not bear the footsteps of the British on this ground. His declaration was aimed at gaining the support of these anti-British Palestinians.

After hearing about their independent state, these Palestinians later supported the British. But they did not realize that Belfort had a wicked and cunning motive behind it. I realized when the war was over. After the end of the war, it was seen that Jews were coming to Palestine in groups to build houses. Jews are coming from Europe by ship. The British administration in Palestine is fully cooperating with their patronage and rehabilitation work. Some of the Jews bought land from the local Arabs and built houses, while others occupied the fallow land and settled there. For some, the British administration itself acquired land and arranged for the construction of settlements.

Until the beginning of the British colony, the number of Jews in Palestine was in the thousands, and in a few days it would have exceeded one million. By 1928, 620 large Jewish settlements had been established. By 1931, the number of Jews had risen to 2.5 million. 16 percent of the original population. Can you imagine 4 percent to 16 percent in just a few years?

Imagine for a second the number of Jews in Palestine continued to grow. It continues to grow at an even more unimaginable and rapid rate. So much for the fulfillment of the Jewish dream. They dream of an independent territory. Where they can weave a web of deceit without any hindrance. The British are doing their utmost to help the world achieve its dream of unrest. America is with them.

The Belfort Declaration was a step towards realizing this dream. But why would America and Britain give such support to the Jews? Why do they need to go against world public opinion and establish a separate state for the Jews, a historical terrorist nation?

In response to this why A lot can be said. Most Jews lived in Europe. When and how they sit, the corner is not right. It is very difficult to believe them. The farther they can be kept, the better. If we make a state for them in Palestine, they will go to their own state. Europeans will be free from panic and fear of harm. Other than that the Jews are a very far-sighted nation. They are employed in every department of the British and American administrations. They always put pressure on the administration from within. Because of their pressure, the British-American administration was forced to work for a separate state for the Jews.

The Jews have a huge fortune. After the end of the First World War, their top leaders proposed to Britain, “Palestine is under the control of the Taemas, make us a state there, we will make up for all that the Taems have lost in the war.” Artificial phosphorus is a rare ingredient in making bema. Britain’s need for a Jewish scientist in the First World War. Hayes Baizman made this thing. The materials used by him are very useful to the British during the war. The British Prime Minister was pleased with his work and asked what reward he wanted for it.

Baizmann replied, ‘You will help us build an independent territory. And that will be on Palestinian soil. Buss, nothing more.

For a variety of reasons, British-American forces began pushing for the establishment of an independent Jewish state in Palestine. After the end of World War I, the British retained control of Palestine mainly to realize this dream. For 30 long years, they ruled here and arranged for a separate state for the Jews. On the one hand, they are opening the door to Palestine for Jews living in different parts of the world, on the other hand, the Jews who have come to help them have formed various terrorist organizations.

When this repression of the Jews came up in the world media and a storm of criticism began, they changed tactics. The Jews are a terrible community. They do not hesitate to kill their own innocent people for the sake of their national interest.

Read the other episodes in this series:

Occupying Israel in the heart of Palestine

This is a Bengali article. This is the third episode of ‘The History of Zionist Israel’.

Necessary references are hyperlinked inside article